CLANK CLANK. Ghislaine Maxwell was sentenced to 20 years in prison Tuesday for carrying out a years-long scheme with her longtime confidante Jeffrey Epstein to sexually abuse underage girls. 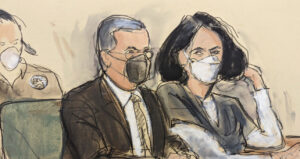 Maxwell, 60, was convicted in December on five of six counts against her, including sex trafficking of a minor, transporting a minor with the intent to engage in criminal sexual activity and three related counts of conspiracy. She was acquitted on one charge of enticing a minor to travel to engage in illegal sex acts.

The British socialite was sentenced on only three counts after Judge Alison Nathan agreed that two of the conspiracy counts she faced were repetitive.