On the birthday of R Kelly, his girlfriends Azriel Clary and Jocelyn Savage had a fight at his Trump Tower apartment. The fight as you can see in the video starts when Azriel in the middle of moving out the apartment gets upset that Jocelyn is allowing strangers to have access to the apartment. Jocelyn in video lunges at Azriel and the phone drops as the fight ensues.

Azriel then video tapes herself reporting Jocelyn to the police.

Jocelyn later responds on Twitter to Azriel police report and is arrested for simple assault. 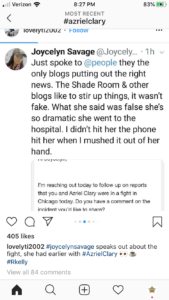 Azriel is officially telling the truth about her involvement with R Kelly. She claims in her many videos yesterday that she lied in the Gayle King interview and Jocelyn slept with her as a minor. These allegations may be added to Kelly’s current Chicago and Atlanta cases.