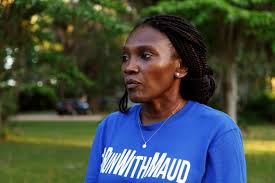 On February 23, 2020, Ahmaud Arbery was killed while running through a Glynn County neighborhood in Georgia. Arbery’s death sparked a lot of outrage and outcry for social justice. One of the foundations formed from the tragedy was the 2:23 Foundation.  The 2:23 Foundation stands for the day Arbery was killed, February 23rd.  The key players associated with the foundation include Jason Vaughn, one of Arbery’s high school football coaches, his brother, Arkansas attorney John C. Richards, Jr., and Akeem Baker, Arbery’s best friend. They have been active in supporting Cooper-Jones through it all. 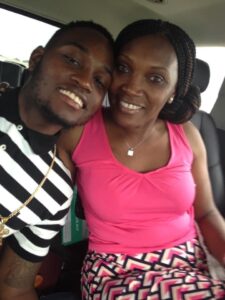 Apparently, the foundation has a Labor Day event planned. However, Arbery’s mother, Wanda Cooper-Jones (Cooper-Jones) does not want people donating money to the  Labor Day run. Cooper-Jones told Atlanta Channel 2 News that she feels the group behind the run is disrespecting her son’s memory.  The foundation claim their intentions were to pursue justice for Ahmaud. The team has not benefited financially from any of the work they have done and has spent their own money. Cooper-Jones claim she not aware of what was going on until she seen it on Social media.

According to the 2:23 Foundation, they made Cooper-Jones aware of our intention to create a page to continue to pursue justice and discuss action step,” and, “She said it was fine.” Cooper-Jones believe her son’s tragedy is being used for fundraising purposes. Cooper-Jones wants to know what they are, and she doesn’t want control of the money raised but input to ensure it is used properly.

A go-fund me account was created by Baker, but Cooper-Jones apparently did not approve of. She currently has control over the money. Approximately $2 Million was raised. Cooper-Jones is looking for the right avenue for the money. Cooper-Jones is concerned that Richardson and Baker have applied to trademark the phrase “I Run with Maud” — a phrase credited to Vaughn 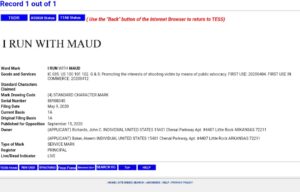 On May 9, 2020 a trademark was filed  for “I Run With Maud”. Allegedly, the purpose of the trademark was to preserve it for Arbery’s parents and stop others from trying to trademark it.  According to Cooper-Jones, she never agreed to that, nor was she asked to be a part of it. She also mentioned “One of the trademark applicants had never even met her son, yet applied for the trademark in an attempt to profit off Ahmaud’s name.”

The trademark has filing basis. “A filing basis” is the basis in the Trademark Act upon which you have filed your trademark or service mark application with the United States Patent and Trademark Office (USPTO).  You must include one or more filing bases in an application.  Each “filing basis” has different requirements that must be met before a trademark or service mark may proceed toward registration. It can be  intend to file (1B) or already being used In commerce (1A).  Here the filing basis and registration used is (1A). This commerce basis (1A) claims applicants are currently using the mark in commerce with their goods and/or services.

If the family is unhappy, the family can challenge the trademark with a false association. There’s a Trademark Act that works to protect one’s right to privacy and to prevent the unauthorized use of the persona of a person or institution. The trademark can be challenged even if Ahmaud entire name is not being trademarked. Here, one would have to prove that “I run with Maud” is connected to Ahmaud Arbery.