Earlier this week, WE TV put announced they pushing back the premier of a new reality tv series, starting Tamar Braxton. This announcement follows an overdose by the singer and reality star. 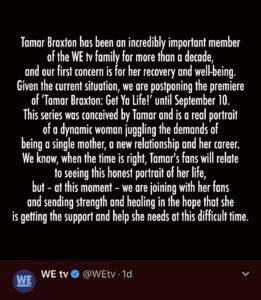 In the 911 call, on the day of the incident, Tamar’s boyfriend, David Adefeso, cited the reason that Tamar was distraught was because she had been feuding with the network over her portrayal on the upcoming show. This is fitting, as a cryptic text message she sent to family beforehand stated “I am a slave. I do not own my life. My stories. My pictures. My thoughts or beliefs. I’ve asked my massa to free me. I’m threatened and punished for it,” she expressed. “The only way I see out is death. I will choose that before I continue to love (sic) like this. Please help me (praying hands emoji). WE TV states that the premiere of “Get Ya Life!” is postponed until September 10 given the current situation and that their first concern is for her recovery and well-being.

In entertainment contracts, especially at this level, the terms warranting a termination of the deal are spelled out unambiguously to avoid any major loss on both sides. It seems that the two parties are at odds; Tamar is not satisfied with the product and the network would like to protect their interest by premiering the show. Postponing the show is likely a compromise given the gravity of the situation at hand.

How do you think they should move forward?