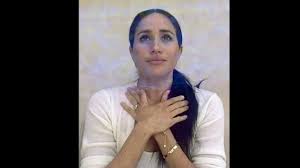 A Commencement Speech for the Ages.

Yesterday, Meghan Markle, the Duchess of Sussex and first biracial woman to marry a senior British royal, addressed the tragic death of George Floyd in a virtual commencement speech to the graduating class at Immaculate Heart High School, where she graduated in 1999.

She began by saying she had scrapped her prepared speech to directly address the current situation. While she admitted she was nervous her statement would get picked apart, she added, “The only wrong thing to say is to say nothing.” The former Suits star lamented the death of George Floyd, proclaiming “George Floyd’s life matter” before listing other African Americans who had been killed by police officers, including Breonna Taylor, Philando Castile, and Tamir Rice.

She also compared the current protests to those she witnessed in 1992 after the brutal beating of Rodney King by the LAPD when she was just entering middle school. She recounted seeing ash in the sky, the tree in her front yard burned to a crisp, and people looting. She explained that the protests are also connected in her mind because they were both “triggered by a senseless act of racism.”

She emphasized a piece of advice she received from an Immaculate Heart teacher that has stuck with her: “Always remember to put other’s needs above your own fears.”

She finished by telling the students that they are all in a strong position to be part of the “rebuilding” of the country.

The speech left many students in tears, according to accounts online. Meghan later released the video of the speech to black women’s lifestyle magazine Essence.

Previously, both Meghan and her husband Prince Harry had remained silent on social media about George Floyd’s death and the protests sweeping the nation.

Were you moved by her emotional address?