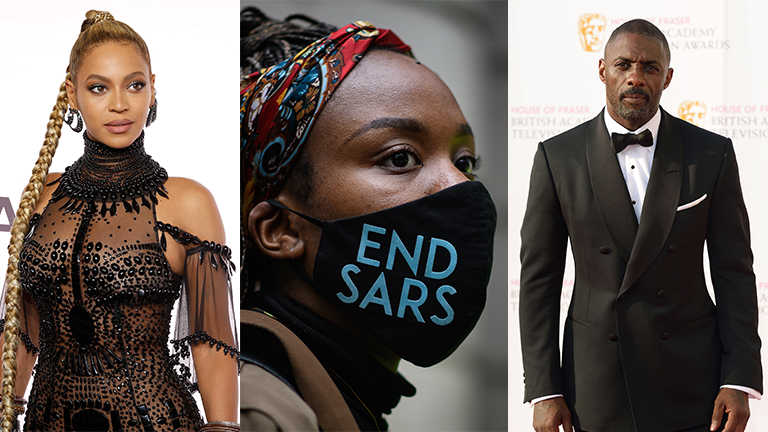 Protests in Nigeria broadened dramatically this past month, with tens of thousands of citizens calling for the abolishment of the controversial police force, Special Anti-Robbery Squad (SARS). Demonstrations over the past few weeks have urged a stop to the  corruption and lack of accountability that allows SARS to inflict brutality and unprovoked violence on the country’s populous. Impacted by the ruthless treatment of protesters by Nigerian police, support has boomed internationally and compelled many celebrities to post on social media demanding for dismantlement of SARS. 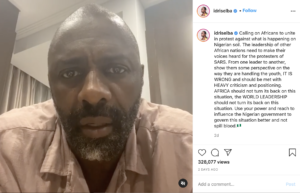 Celebrities including Beyonce, Rihanna, Naomi Campbell, Chance the Rapper, Estelle, and Nicki Minaj used their social media platforms to spread awareness and offer their voices to catalyze the Nigerian government to truly #EndSARS. Idris Elba recently posted a video on Instagram, “[d]rawing attention to what’s happening in Lagos right now. What’s happening is an atrocity, and murder. And I’m calling to leaders…to all African leadership to say something to the Nigerian government…Please do something, say something.”

SARS was established in 1984 to combat rampant crime and lawless activity that was ailing Nigeria at the time. Although successful at the start, the police unit transformed into a government backed criminal enterprise that Amnesty International deemed to have shown “an absolute disregard for international human rights laws and standards.” Between January 2017 through May 2020, an Amnesty International report found at least 82 cases of torture, ill-treatment and extrajudicial executions conducted by SARS officials.

On October 12, President Muhammadu Buhari agreed to disband SARS but protests did not subside as subordinates of the President indicated that SARS officers would be redeployed to other units in the police system. This past week clashes between protesters and police turned increasingly violent given the government’s lack of response to demands that SARS officers be fired and/or prosecuted for their ruthless acts that have tormented the Nigerian people. 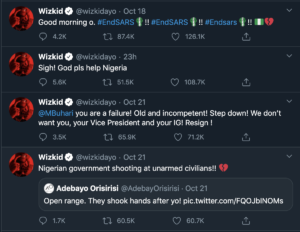 Local Nigerian celebrities such as Burna Boy, Davido, WizKid, Tiwa Savage and Mr. Eazi are heavily active in motivating the populous to face the Nigerian government head on. In a protest on October 10, WizKid urged the youth of Nigeria to speak out. “We are not scared to speak….Nigerian youth, don’t let anyone tell you you don’t have a voice.”

Do you think that protests will be successful in pushing the Nigerian government to hold ex-SARS officers accountable for their atrocious acts?