Kanye West left fans bewildered on Sunday after he posted a photo of himself wearing a Make America Great Again hat once again on his private jet and called for the abolishment of the 13th Amendment in the caption.

‘We will no longer outsource to other countries. We build factories here in America and create jobs.’

West later attempted to explain his remarks in two other tweets, writing: ‘The 13th Amendment is slavery in disguise meaning it never ended. We are the solution that heals.’

West later attempted to explain his remarks in two other tweets, writing: ‘The 13th Amendment is slavery in disguise meaning it never ended. We are the solution that heals.’ 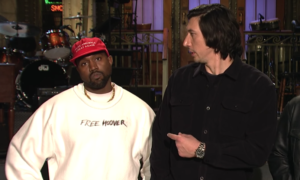 West’s outlandish comments came hot on the heels of his performance on Saturday Night Live this past weekend.

After his final song, West shocked the audience as he began talking about his support for Trump and claimed he was asked by the show not to wear his MAGA hat. The audience booed him.

Kanye West was actually referring to the “imprisonment” exception to 13th amendment that stated slavery was abolished and everyone was free except those that commit crimes who had to be jailed. Hence why so many blacks were jailed over so many minor crimes after slavery was abolished. The American prison system became the new slavery. Kanye’s wife Kim Kardashian is also been a huge help to prison reform movement recently with her freeing an imprisoned grandmother. Too bad he couldn’t have spoken more eloquently about what he meant to say and also left his MAGA hat at home. Unfortunately  it detracts from his message. We also have 2 more months of this attention seeking behavior because he has delayed his album until next month.