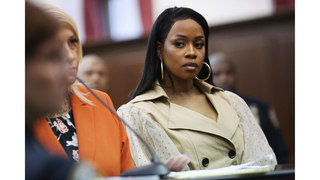 The feud between Love and Hip Hop cast mates Brittney Taylor and Rapper Reminisce Mackie aka Remy Ma is not settling anytime soon.

The State moved forward with Taylor’s report on her assault (black eye) and issued a warrant for Remy’s arrest. She promptly turned herself in and was let out on $1500 bond yesterday and was given a curfew if 8pm. Hers also a protective order where she has to stay away from Taylor.

However, that’s not the end of the story. Remy is claiming she was nursing her daughter at 9:30 pm which is the time of the alleged incident so she has pleaded not guilty.

Unless Taylor can find some witnesses  fast and a hurry this will be a he said she said case. Taylor is also separately suing civilly in this matter for damages.

If you recall, Remy was sentenced to eight and served six years in prison for shooting a friend that stole from her. So it appears defending herself and her property is nothing new to Remy. But prison may also not be new to her either depending on how the facts shake out in this case.