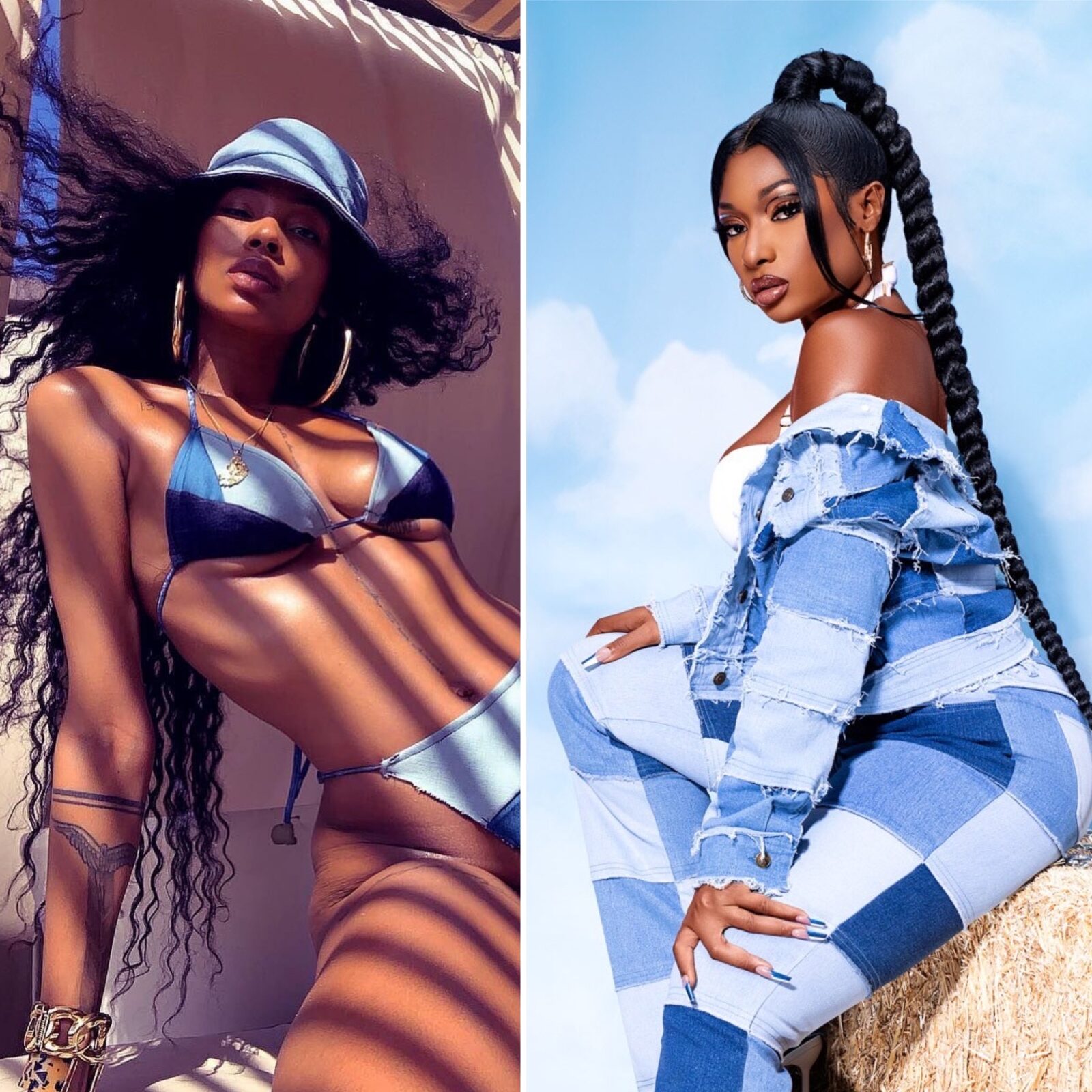 The piracy paradox of fast fashion.

Megan Thee Stallion’s highly anticipated collaboration with Fashion Nova dropped last week and although it reportedly brought in $1.2 million in the first 24 hours of its release, Megan is facing accusations that some of her “signature” pieces were actually appropriated from other creatives. Specifically, designer Aazhia took to IG Live to call Megan out on stealing a unique dress from her TLZ L’Femme collection. Megan’s version for #FNxMEG, titled the Chase the Bag Should Pad Mini Dress, features a similar boxy top, high neckline and long cloth draped down the front. 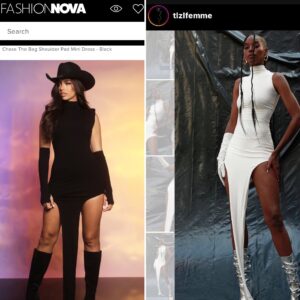 Aazhia posted a side by side of the seemingly identical dresses along with a previous text from one of Megan’s representatives asking the designer if they “could pull the [look] from [her]” for an event Megan was attending in LA. The caption read, “IMA BREAK THIS DOWN REAL SIMPLE! MY DRESS WAS STOLEN AND USED IN THIS MEGAN X FN COLLAB! WAS I TOLD? NO! WAS I COMPENSATED? NO!” Aazhia, whose brand has been worn by the likes of Beyoncé, Bebe Rexha, Kali Uchis, Cardi B, Kylie Jenner and Rosalía went on to assert, “HER AND HER TEAM ARE VERY MUCH AWARE OF [MY] BRAND AND THIS WAS APPROVED BY HER!” 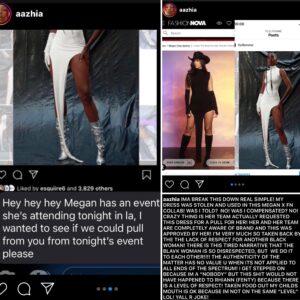 On Tuesday, Megan defended herself in an interview with “The Morning Hustle” claiming that often her team talks to people and makes decisions without consulting her. Megan emphasized the design wasn’t stolen – “it’s been a dress that has been done a lot over the years.”  Even so, Megan stated that she would have made amends with Aazhia had she approach to the situation differently: “It’s a way to come at people. If it would have been a real misunderstanding, I wouldn’t have had a problem with saying, ‘Oh, I’m sorry sis. Let me check my stylist, don’t do that, it’s not right.’ I would have had the dress taken down, whatever the money made from the dress, I would have gave the money to the girl…”

Aazhia responded to Megan’s interview through an Instagram Video posted to her timeline. Particularly, she stated that she was “vexed because [Megan’s response was] condescending, disrespectful and hypocritical.” However, although Aazhia is upset by the shady way in which her design came to be a part of Megan’s FN collection, legally there is not much recourse or remedy that she can pursue. Under copyright law, fashion designs (as clothing) are considered functional and not protectable. If Megan had stolen a pattern that appeared on a piece of clothing, the rip off may have been actionable as a pictorial, graphic or sculptural work. Under separability analysis, to be protected, a feature must be able to be 1) separately identified from, and 2) exist independently of, a useful article (Star Athletica, LLC v. Varsity Brands, Inc.). Here, the design of the dress can’t be separated from the utility of the dress itself, and thus can’t be copyrighted. Further, there would be no claim for infringement if Megan’s assertion that she created the design independently is genuine.

Despite impossibility of successful legal action, do you think Megan independently created the dress or stole the design from Aazhia’s collection?