Danuel House missed the final games of the series after the league determined he had broken the bubble protocol.  House sat out of a game while the NBA investigated him for allegedly allowing a female COVID-19 testing official into his hotel room. Upon completion of the investigation it was determined that he did in fact spend several hours with the “unauthorized guest” in his room. After breaking protocol, House left the bubble. “ 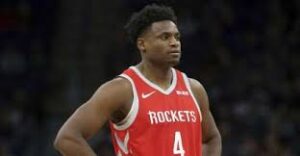 The Bubble campus is located at Walt Disney World in Florida. The Bubble was created as a solution plan for professional athlete players during the pandemic. When Covid-19 started the NBA had to shut down to help prevent the spread of the virus. These safety protocols were put into place so that players could continue to play.

The success of the game season is dependent on everyone doing their part and following the protocol closely. According to ESPN,” Everyone who arrives on the NBA campus — including players, staff and player guests — will have to certify in writing that they will adhere to all pre-arrival protocols and all league rules while in attendance. Teams must inform the NBA of any potential violations of the protocols by a player or team staff member and will handle discipline.

The NBA is taking the Bubble Protocol serious. The plan is intensive but covers all expectations and social distancing guideline that everyone on campus must adhere to. There is also an anonymous hotline for campus participants to report any potential or actual violations. It is likely someone saw House breaking the rules and called the hotline. The discipline for a player for violating the rules on campus will range from a fine to a suspension to removal from campus.

House is married and his wife may have indirectly responded to the news by writing” Reap what you sow” on her Instagram feed.  Seems like there may be some consequences from his wife and the league.  House’s violation was the first major violation of the NBA bubble protocol since it was created in July.

What are your thoughts? Do you think this is Karma?