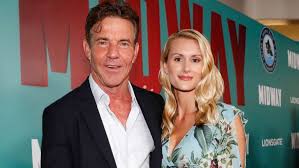 Dennis Quaid, 66, married Laura Savoie, 27, in an intimate beachside wedding ceremony at a Santa Barbara resort on June 2. The pastor was the only witness at the ceremony.

The couple had been engaged since last October. They originally planned to marry in Hawaii in April and hold a second reception in Nashville, but both ceremonies were postponed due to coronavirus.

Savoie is a doctoral student who met Quaid at a business event in 2019. She graduated valedictorian from Pepperdine University and holds a master’s degree from the University of Notre Dame in accountancy.

Of his new bribe, Quaid says, “I just love who she is as a person. Her character, her intelligence, of course her beauty. And her point of view of the world.”

Quaid has previously been married three times, to actress P.J. Soles from 1978–1983, actress Meg Ryan from 1991–2001, and real estate broker Kimberly Buffington-Quaid from 2004–2018. Quaid currently hosts the podcast “The Dennissance” through the Audio Up network.

Were you caught off guard by the surprise ceremony?