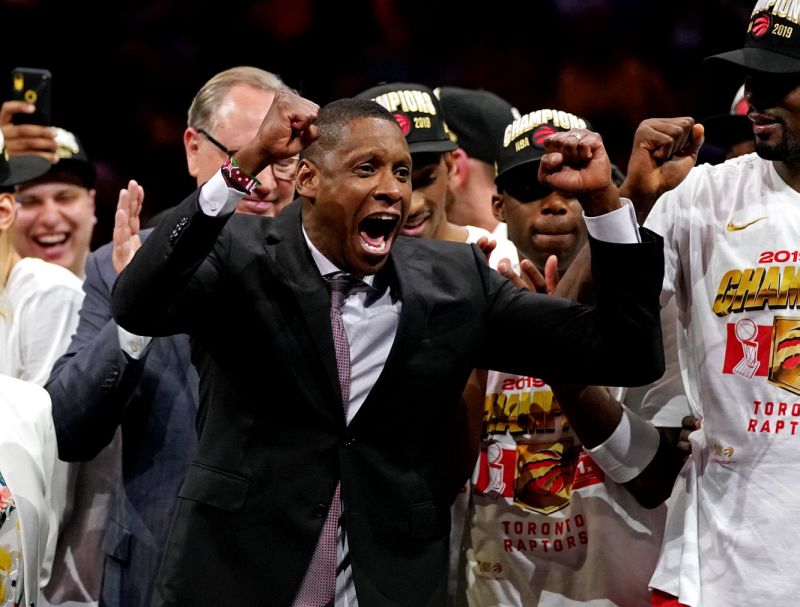 The Toronto Raptor’s have a lot of celebrating to do after the NBA title win over the Golden State Warriors but no so fast.

In the midst of rushing the court to celebrate their win, Masai Ujiri, (“Ujiri”), the president of basketball operations and general manager of the Toronto Raptors, allegedly assaulted a California sheriff’s deputy.

The California sheriff’s deputy claims he will purse misdemeanor assault charges against Ujiri for the alteration after Game 6 of the N.B.A. finals. The events of the alleged assault happened like this: Ujiri tried to go down to  the court shortly after the game ended, but he was stopped by the above mentioned officer because he did not display the proper credentials. After being stopped, the officer alleged Ujiri pushed him out of the way in order to make his way on the court. However, the officer resisted Ujiri’s attempt, then Ujiri allegedly struck the officer in the face. Since the incident happened in the state of California, California law will apply. Accordingly, the elements of a cause of action for assault are: (1) the defendant acted with intent to cause harmful or offensive contact, or threatened to touch the plaintiff in a harmful or offensive manner; (2) the plaintiff reasonably believed he was about to be touched in a harmful or offensive manner or it reasonably appeared to the plaintiff that the defendant was about to carry out the threat; (3) the plaintiff did not consent to the defendant’s conduct; (4) the plaintiff was harmed; and (5) the defendant’s conduct was a substantial factor in causing the plaintiff’s harm.

Without seeing the occurrence, it is hard to comment on whether there was an actual assault or not. Merely words are usually not enough to meet the elements of assault. However, based on the above mentioned elements of assault, words can be enough for an assault if coupled with aggression or anger causing the officer to believe he was going to be touched in a harmful manner. Below, there is a link to the aftermath of the altercation and based on the video, it appears that both the officer and Ujiri are angry. Having to be restrained and pulled away, Ujiri could have potentially said harmful and threatening words. Did the officer fear for his safety? Did Ujiri actually strike the officer—if so then this assault could turn into a battery? What did Ujiri actually say to the officer? Is the officer going to pursue criminal charges or civil charges or both? Stay tuned for updates about this story as it develops and more facts are released.

Video of the aftermath of the altercation: https://www.nytimes.com/2019/06/14/sports/masai-ujiri-toronto-raptors.html